Crate training is the best way to prevent your dog from misbehaving, injuring itself, developing bad habits, or having accidents, and it will provide him with a sense of security. Your dog’s crate should be large enough for him to stretch out on his side and to sit or stand erect.

Let your dog explore the crate on his own. Leave the door open and put some treats inside to entice him to investigate. Feed him his meals in the crate, and put the bowl in the back so he has to go completely in to get it. While he is eating, close the door so that he can get used to being confined. Start with a few minutes at a time, then slowly increase the duration. Next, leave the room for a few minutes, slowly increasing the time that you’re gone. Progress to leaving the house for short amounts of time. Increase the time slowly and you will be able to leave him for longer. Take advantage of times when he is tired (after training, playing, etc.) to leave him in the crate alone.

Do attempt to crate train your dog when you have ample time so that you can be around to discourage bad behavior and rewards when necessary.

Do not make leaving your dog in the crate or removing him from it eventful. He will not be relaxed if you are concerned about leaving him, and he will not be calm if you are always excited to take him out of the crate.

Do not use the crate as punishment or for a time out. Remember that you are trying to form a positive association between your dog and his crate.

Do not allow anyone or anything to pester your dog while he’s in his crate. It is supposed to be his safe place and it is your responsibility to make sure it becomes that.

Do not leave your dog in the crate for extended periods of time. Puppies under six months should not be left in the crate for more than four hours at a time. An adult dog can go longer, but it is not ideal. If there is no other option to leaving him in the crate for a long time, then it is necessary that his out-time be filled with exercise and mental stimulation.

It is common for a dog who isn’t crate trained to whine or bark in the beginning. Do not give your dog attention or release him from the crate when he is barking, because it will reward the barking. If you are sure he does not need to eliminate, then ignore him. If that doesn’t work, then use a small correction each time he barks (a squirt of a water bottle or a firm ‘NO’). When your dog quiets down, it is important to reward him so that he knows what acceptable crate behavior is. Try to form a positive association by giving him a special treat in the crate when he is behaving (a marrow bone, a Kong with frozen peanut butter, a bully stick, etc.). It is important that these only be given when he is in the crate.

If your dog does not want to go in the crate, teach him to go in on command. Use a verbal cue such as ‘kennel.’ Take your dog on-leash to the crate and guide him inside saying ‘kennel.’ Unclip the leash before securing the latch and quietly reward him. Do this every time you put him in, and eventually he will learn to do it without your help.

Need further assistance with a pet displaying unfavorable behaviors? BARCS is here to help! Please email us here for more help with a training or behavior-related issue with your pet. 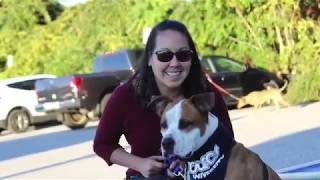